Is architecture at odds with politics? In a rare moment in April, I bought a copy of The Economist, but it was not the obvious architecturally related homeownership article which caught my eye – but rather it was pages 63 and 64, and an article titled: “There was a lawyer, an engineer and a politician …”Well spotted – no architect in sight.The article’s sub-title was a little more revealing: “Selection bias in politics.”

In its analysis of which occupational groups provide our politicians it was noted that: “Over half of America’s senators practised law.” In contrast, in the nine senior ranks of China’s Communist Party, are “eight engineers, and one lawyer.” The article noted that “Different countries – because of their history, or cultural preferences, or stage of development – seem to like particular qualities, and these qualities are provided disproportionately by only a few professions.” Lawyers, business people, diplomats, the military, journalists, economists, doctors, academics, and engineers were the cited professions which dominated politics. Where, one might ask, are the architects? or more tellingly why are architects so under-represented in political engagement?

Of course it’s not a simple black and white story. William Mason (1810-1897), Sir George Alexander Troup (1863-1941), Sir Edward Michael Coulson Fowler (1929-), and David George Porter (1921-1998) are some of the few architects in New Zealand to grace the halls of government – and interestingly it’s been mostly local government and mostly Wellington City Council which has been home to architectural political ambitions.

Mason arrived from England to Auckland in 1840. The following year he formed a partnership in land selling and building design with Thomas Paton. He designed St Paul’s, Emily Pl. (1841-1885), and Government House (Auckland, 1856). Before moving to Dunedin in 1862 he was elected to Parliament (as Member of the House of Representative for the Pensioner Settlements). In Dunedin he had partnerships with David Ross, and then William Clayton, and was elected the first mayor of Dunedin in 1865, serving until 1868. In 1871 he founded Mason and Wales with N.Y.A. Wales, the oldest running architectural practice in NZ.

Troup headed the Railways Architectural Branch, and was responsible for much of NZ’s railway architecture.  This included the Edwardian Baroque Dunedin Railway Station (1904-1907), and the housing factory at Frankton Junction, following a trip he made to America to see housing factories “which specialised in cut-to-fit continuous house-building operations” (Shaw Architecture New Zealand p. 49).

In 1925 he was elected to the Wellington City Council. In his first couple of years in local government he chaired the Works committee, responsible for both the Rongotai airport and a second tunnel through Mt Vic. In 1927 he was elected Mayor, raising money for the construction of the National Art Gallery and Dominion Museum, the Carillion and a new Wellington Railway Station. Gingerbread George’s years in power ended in 1931, after one term as mayor. 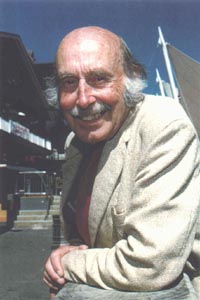 Porter was a key member in the establishing of the Architectural Centre in the 1940s.  He was an Honorary Secretary (1947-1951) and a President (1951-53, 1958-60) of the Architectural Centre.  He taught townplanning, architecture and related subjects at the Arch Centre school.  He was the Porter in Porter and Martin (1954-1981).  His involvement in local body politics was for 15 years standing on the Wellington City Council (1959-c1973).  This work included the provision of public housing (2,200 houses) and advocating for urban renewal and town planning.

Fowler was a principle of Calder and Fowler, the architectural incubator of Roger Walker from which the reknowned, and now demolished, Wellington Club was brewed. Fowler became Mayor in 1974 until 1983,  and reputedly asked Warren & Mahoney to whip up a town hall for Wellington just like the one they did in Christchurch. Whether the rumour is true or not, it’s certainly what he got, and the Fowl house, as the MFC has been named in numerous Arch Centre newsletters, is the building most associated with Sir Michael Fowler.

It could be argued that Maori architects have been more successful in politics – though some dispute as to whether Maori such as Tahupotiki Wiremu Ratana (1870-1939) and Apirana Ngata (1874-1950) were architects – but let’s ignore them.  They certainly have had influential roles in architecture in this country. Ratana has been credited with designing the Ratana Temepara (with Clifford Hood) though a court case following the designwork ensued and since most architectural history suggest a joint role in designing.  Shaw for example noting that Hood “drew the plans according to the instructions of T.W. Ratana” (Shaw Architecture New Zealand p. 127).

Ngata, the most educated politican of his time, was the driver of a renewal in Maori architecture.  His building and restoration projects included Rangiatea (1843), St Mary’s Tikitiki (1924) and Te Hau ki Turanga (c1840s).

… and so to the bigger question.  Why haven’t there been more architects involved in politics?  and do we really want a political system overrun with lawyers? and surely any architect would be better than Rodney Hide?