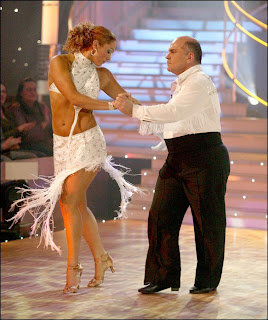 First they let him loose on the dance floor, then Super-Auckland, and now the rest of us – does this man know no humility…?

Rodney Hide is set to Tango all over Local Body law in order to reduce them to core services – such as public health and safety, and rubbish collection. Here is the official report from this morning’s Herald.co.nz article (although a fuller media account of the proposals can be found here):

The Cabinet has signed off on Mr Hide’s request for the Department of Internal Affairs to review local government law, including the removal of the requirement for councils to deliver on “community outcomes” such as social, environmental and cultural “wellbeing” which Mr Hide said pushed councils into providing services well beyond their core roles.

Brilliant. Community wellbeing is obviously unrelated to health outcomes in Rodney’s beady eyes, as are environmental concerns. Gone would be the summer city events or indeed, celebrations of any form, urban design would be about improving streets for kerb-side garbage collection, and libraries would be sold to the highest bidders to be run as a private enterprises. District plans would no doubt be things of the past, to provide unfettered development opportunity to the great invisible hand (which, let’s face it, generally  results in a more than visible two-fingered gesture in terms of positive social and community outcomes). Developer driven ‘architecture’ – a Tui billboard waiting to happen…

All I can say is thank God for our Socialist Prime Minister, who was quick to distance himself from Hide’s views, stating that they do not necessarily represent Government position. Quite frankly, I find it weird that Hide was all silent about the rescinding of lower tax rates (that magical panacea for poor economic performance for all good right wing acolytes) in the recent budget – but is far more extreme on this issue. This speaks to me of a good little lap-dog, given just enough leash to think that he has some freedom, before being yanked into line by his master before he can do any real damage…

Anyway, I suspect that the review will confirm the importance of social/cultural/environmental mandate of our Councils, and despite being an otherwise waste of taxpayer dollars, will help to entrench current practice. After all, as important as core services are, what are we left with when we are denied the ‘fruit’ that the core is supposed to sustain?