Naked streets: the Dutch are doing it – why don’t we?

“Naked streets” or “Naked roads” – some even call them (more tamely) “Shared Spaces” – have apparently been around since the 1980s.   Credited to Hans Monderman, the Naked street idea is based on a psychological approach which supports designing roads to reflect the different cognitive skills needed in different transport situations.  Shared suburban spaces are contrasted to motorways and argued to need specific skills for their complex human context.  This whole area of thinking has developed more formally into the field of “psychological” or “second generation traffic calming.”

So what’s so naked about them? Naked street design declutters roads. It removes paraphernalia such as traffic lights, signs, kerbs and road markings, aiming for (and achieving) reductions in traffic collisions and overall greater road safety. 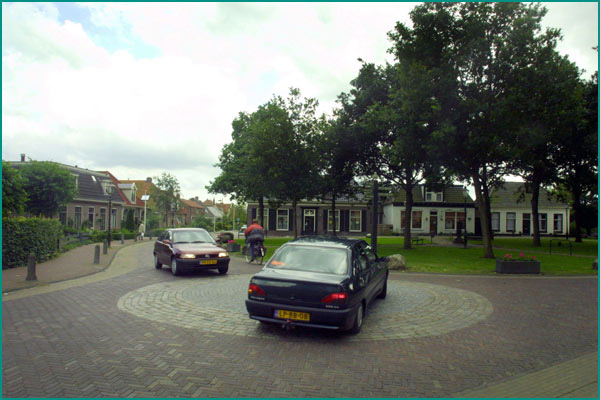 In the Netherlands, the cities of Drachten, Makkinga and Oosterwolde have all successfully used naked road design.   In Makkinga trafffic speeds have been reduced and accidents fell by 10% in the first three years.  Typically, all road users have a greater awareness of who else is on the road – basically because they need to!

In England, The Times picked up on the idea years ago – attributing it to Tory policy, and describing it as “giving drivers and pedestrians equal status.”  Now that’s an idea I like.  The article continues noting that the “question of who had priority would be left open deliberately, making drivers more cautious,” and records Owen Paterson (the UK’s Shadow Transport Minister) stating that “The idea is to create space where there is mild anxiety among everyone so they all behave cautiously” – if only investment bankers had had a couple of naked corporations to deal with, you might say, perhaps the economy would be in a better state of affairs! Living Streets is also a supporter, claiming that traffic-engineered street design has encouraged “drivers to stop thinking for themselves, and to switch off from the world around them.”

So how might we in Wellington benefit from this? Obviously we’ve had our own little naked street experiments going on in Blair and Allen Street, and (depending on what time of day or night), the nakedness achieves varying stages of comprehension.  And even though personally I’m dead against it, if buses do end up being re-routed through Manners Mall what better way to do this than in a naked fashion.

Most minority road users (i.e. those that will come off worst in a collision with a motor vehicle) are particularly aware of the frequency with which car drivers, in particular, appear to (a) see through them, (b) not see them, (c) not register having seen them, or (d) behave as if any of the above has occurred.  Obviously not all car drivers are reckless, distracted or incompetent – but the risk of any of these behind an automotive wheel has a much greater risk of bodily damage than many other traffic misdemeanours.  Let’s face it, not too many pedestrians or cyclists have successfully managed to flatten cars.

If having a bit more nakedness in our streets goes some way to prevent the lack of looking, and the lack of seeing of and by road users then I’m all for it.  In fact I think that we members of the Arch Centre should lobby the WCC and NZTA to get a bit more nakedness into Wellington’s traffic-engineer designing.  Certainly a naked road alongside the National War Memorial makes more sense than SH1.  Courtenay Place could be another candidate.  There must be plenty more.  Naked Moleworth might help ameliorate some of the problems with the proposals for the National Library (yes I know – doubtful).  Nakedness and the Supreme Court? – the list could be endless … come on Wellington – get naked!