…or, sculptural celebrations of inspired engineering and urban design?

Kind of just a gallery post this one, and timely to consider against whatever NZTA might deliver in tomorrow’s big release of the proposals for Transportation Improvements Near the Basin Reserve.

Flyovers, in general, are considered as pretty negative elements within the urban fabric, a topic I’ve already posted on here. They have a tendency to perceptually cut of communities, or even parts of communities from each other – a term know in the field as ‘community severance’. In this case, at the Basin, we already have significant severance issues in terms of getting school kids to and from the school communities in the south east corner of the area. It is a particularly difficult area to access by vehicles, and more importantly, when we consider the vulnerability of school kids, via cycle and pedestrian modes.

Here’s where a well-designed flyover might offer some positives in terms of deviating the east-west State Highway traffic away from this corner of the Basin (of course, a flyover isn’t needed to achieve this, as we have already shown). The consequence of the traffic improvements at the Basin, whatever form they may take, should mean that north-south traffic, including significant public transport, will require less road space, and will therefore allow a higher priority for the exceedingly high amounts of other the transport modes, such as cycling and walking, in the subsequent redesign.

While such moves will help to reduce the severance issues at that particular corner, we have to be very careful about more significant psychological severance issues that flyovers create. Your average traffic/civil engineered flyover is no elegant thing, and when inserted clumsily into existing urban fabric, can wreak far more havoc to communities and the general sense of place than we might initially think.

Typically, flyovers have been responsible for cutting off cities from waterfronts and recreational spaces. Louisville Kentucky is an exaggeration case-in-point – an award winning Waterfront Park on former industrial wasteland, hugely compromised by its severance from the downtown.

The image below is of the waterfront termination of Sth-2nd Street, Louisville’s ‘high street’ Waterfront Park is accessed underneath these overpasses, further along the river (to the right)

The image below looks down onto the Interstate shows how it severs Waterfront Park (left, in the near distance), from downtown Louisville (right):

While it is clear that in the above case, and in most similar overpass situations, that it is actually easier to access the so-called ‘severed’ fabric than if the highway was at grade – it is the psychological deterrent created by both the imposing nature of the structures themselves, and the uncomfortable environment created by the residual spaces, and the activities often associated with them (as the Save the Basin campaign image below suggests). The psychological deterrent is arguably more powerful than the physical deterrent posed by a busy road. Although hardly ideal, we still access our own waterfront across the busy Quays – yet if we had to navigate something like the Lousiville example above (or the example below), would we still feel as inclined to do so?

Which means that  it will require a high quality of design if the more psychological aspects of severance are to be avoided at the Basin. The site is a key one in terms of being a the main acces route to Newtown, and South Wellington more generally. If we were to create some kind of visual ‘gateway’ through poorly thought through design, we would be effectively dividing Wellington city into a much more visually defined/severed south and north cities. Do we want that? Should such a move be the result of transportation improvements, rather than an outcome of a considered debate of our ‘sense of place’ (which would be irrevocably altered by such a move)?

But there hasn’t been much evidence of NZTA (and its predecessors) valuing what we might respect as ‘good design’ in the past – Karo Drive is a case in point – of both severance and uncomfortable residual spaces. Karo Drive is a road amongst streets, conforming to the geometry and scale of efficient vehicle movements rather than the existing street environment and city grid.

I’d argue that any flyover must not present a significant visual obstruction that effectively cuts the city into north and south Wellingtons, and similarly, must eliminate undesirable residual spaces.

First of all, how can residual spaces be put to use?

Although hardly ideal in terms of maintaining visual and physical permeability of urban fabric, we’re probably most of us familiar with the London precedent of utilising residual spaces in this manner:

A better, and more recent precedent is provided in the Netherlands by NL Architect’s A8ernA. the project is an attempt to restore the connection that the existing freeway overpass effectively severs. Check out their website for the full range of activities incorporated in the project, which include, besides the ‘lake’ below, a swimming pool, skate park, kiosks, etc… There is also the McCormick Tribune Campus Center at IIT in Chicago, although it might be stretching the definition a little… 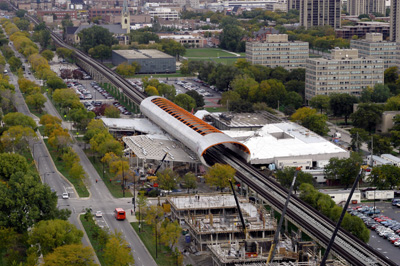 There are also numerous examples that celebrate design and engineering, creating contemporary urban sculptures that add positively to sense of place, rather than detract from it. While none of these is an ideal solution for the problems that need resolving at the Basin, perhaps there might be inspiration found in some of these projects – which are mostly bridges and pedestrian overpasses:

The Santiago Calatrava’s Puento del Alamillo Seville shows how a long span can be achieved in a celebrated/sculptural manner: Calatrava again, this time with a pedestrian bridge proposal for Calgary:

Melbourne’s Webb Bridge (although also only a pedestrian bridge – can we scale these ideas up??):

This one another pedestrian overpass in Berkeley Ca.:

And another across the River Tyne in Newcastle: And of course, the biggest of them all, the Millau Viaduct in France: And finally, the question that must be on all our minds, what would Leonardo da Vinci have done? Around 500 years ago, he designed a stone bridge to cross the Bosphorous for Sultan Bajazet II. Although never realised, it was supposed to have looked something like this:

Da Vinci’s design has also been re-imagined for the 21st century:

There must be plenty more examples to draw from – so post them below. It will give us something to look at until the real thing is revealed tomorrow…