Conventionally defensive architecture might conjure images of castles, trench warfare and maybe even prisons.  I’m interested in a more futuristic viewpoint. It derives from an observation made at the recent NZCCRI’s Climate Futures Forum; that the insurance industry is where climate change is being taken seriously (outside, that is, of the scientific community).  Events over the last year (the Canterbury and Christchurch earthquakes, the Japanese earthquake, tsunami and nuclear disaster, even the tornado sweeping through Auckland’s North Shore the other night) has demonstrated both our need for insurance (and re-insurance) and the possibility that insurance will not be able to cope with the demands placed on it. 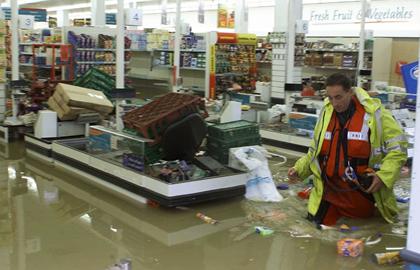 The extreme weather demands that climate change will increasing produce is already confronting us (e.g. over the recent Dec/Jan period: Queensland floods, four weeks of rain affecting 1.9 million people in the Philippines, flooding killing 600 in Brazil on 14 January, Sri Lanka experiencing the heaviest rain for 100 years with 300,000 people displaced …), and it is beginning to be understood that insurance as we understand it now – is not sustainable.  Numerous web sites suggest this, saying that “climate change poses material threats to the insurance industry,” that “Insurers increasingly recognise that it is the lack of action to combat climate change that is the true threat to their industry,” and that in 2007 the insurance industry “launched a major initiative to help tackle climate change … [developing] a set of ClimateWise principles … to reward customers for cutting their greenhouse gas emissions.”