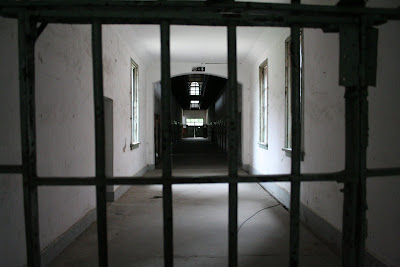 It’s a bit of an old chesnut but here we go again – lock ’em up and throw away the keys.  This week it seems that Act and National are convinced that humanity can’t do what architecture is so good at – incarceration.  Their addition to the Sentencing and Parole Reform Bill, if enacted, will mean “no prospect of ever being freed for those convicted of murder or manslaughter.” Such thinking makes architecture the ultimate punishment.

Prisons began as an ad hoc collection of holding cells – dungeons, basements, back rooms in pubs … – prior to punishment (such as hanging, drawing and quartering, or transportation to Australia &c.).

The Howard League’s website mentions the C16th and C17th Houses of Correction as early prisons aimed “to instil habits of industry through prison labour,” and the use of prison hulks – boats anchored at Thames, Plymouth and Portsmouth to accommodate prisoners at night after days of hard labour.  These had been initially seen as a temporary alternation to the ceasation of transportation as a punishment – but ended up being a staple of England’s prison system for 80 or so years. Conditions on board were pretty hideous.  Apparently it was “the use of prison hulks did much to persuade public opinion that incarceration, with hard labour, was a viable penalty for crime.”

This was the C18th and the time of Jeremy Bentham’s famous Panopticon (1791), but also John Soane’s entry for the 1780s Battersea Penitentiary Competition, who, influenced by John Howard‘s The State of Prisons in England and Wales (1777), proposed prison architecture as a systematic process of reformation.

The Auburn (or New York) system inflicted a combination of hard labour, solitary confinement and enforced silence, and developed in the 1820s in Auburn Prison, NY.  Prison, in this thinking, was to teach personal discipline and respect.  The rule of silence was aimed at reformation rather than simply punishment.  The prison cell echoed the monastic cell as a place for comtemplation and reflection.  Architecture and prison rules combined to blur the lines between prison as punitive and prison as reformative.  While history since the early C19th has (obviously) continued to introduce new ideas about prison as punitive (including supermax prisons and hi-tech jails), the need for rehabilitation has been constantly raised, and kept alive by those such as the Howard League who consider that human beings and our errings are more complex than that which can simply be solved by incarceration.

At a time when debate reigns about whether cows in the Mackenzie Basin should be imprisoned 24 hours a day for eight months of the year, and in the same week as the new Supremo Court has opened, surely a more complex understanding of the issues of imprisonment and the causes of crime is needed.  Equally we need to realise that not only are there things that architecture can’t do – but also perhaps things that it shouldn’t do.