By adminSeptember 1, 2016No Comments 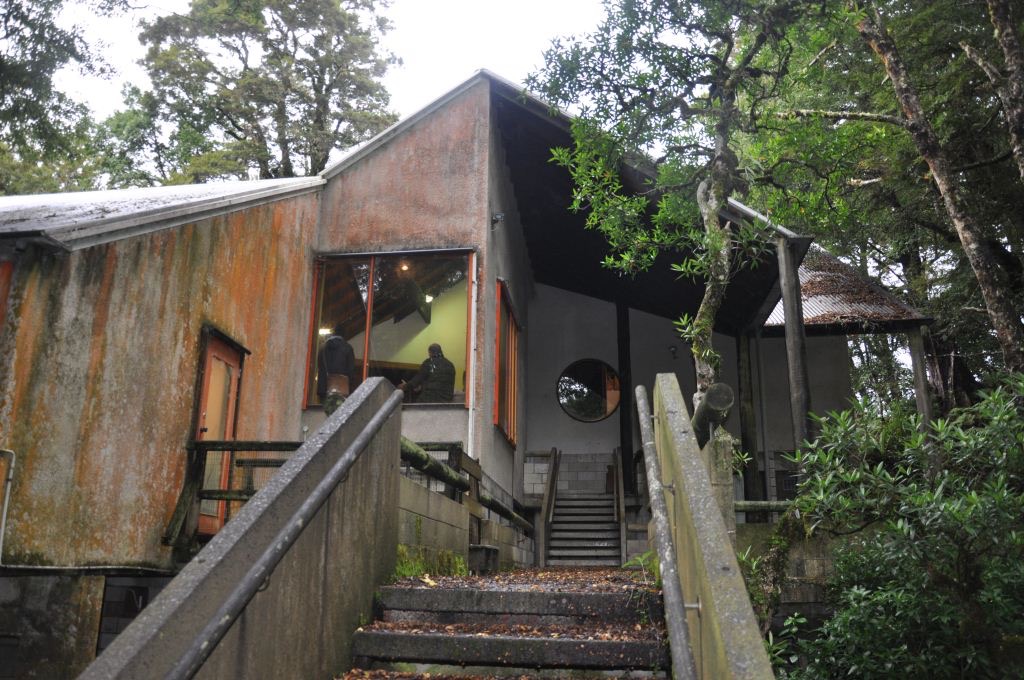 The news that the Department of Conservation will demolish John Scott’s Aniwaniwa (a.k.a.  Te Urewera National Park Visitor Centre (Former), 1974-76), with the blessing of local iwi, Ngāi Tuhoe, has been greeted by the architectural community with horror.  Frequently, such a case (a modernist building in decline), would replay issues seen in other cases of threatened modernist heritage buildings, namely a building’s lack of maintenance, and secondly a lack of appreciation of modernism.  But in this case the heritage values are not disputed.  As Ngāi Tuhoe’s Tamati Kruger has said, “while they respect and acknowledge the heritage values in the building, Tuhoe supports DoC’s decision to close the old centre.”

The heritage values were largely articulated in NZHPT’s registration report.  NZHPT (now Heritage New Zealand), gave the building a Category I (No. 9553) registration in 2012.  They have the legislative duty to “to advocate the conservation and protection of historic places,” Heritage New Zealand Pouhere Taonga Act 2014 (s 13(1)(c)) but have been strangely (but increasingly not unusually) silent.  As James Blackburne, President, Historic Places Aotearoa has noted: A significant part of the heritage argument rests on the building’s biculturalism. This is an argument more established for Scott’s Futuna Chapel (1958-61), built for the Catholic Society of Mary – where archival drawings show Scott’s experimentation with the form of the wharenui, the inclusion of the poutokomanawa, and his proposal to include tukutuku – which did not eventuate.  It was Russell Walden who promoted this idea of Futuna’s biculturalism, as a part of his nationalist project to position New Zealand architecture on the world stage.  His publications date from an era when New Zealand was grappling with bicultural assertions of the Treaty as signifying “a partnership between [the] races [of Māori and Pākehā],” an idea credited to Lord Cooke of Thorndon in New Zealand Maori Council v Attorney General CA54/87 (29/6/1987). The argument for Aniwaniwa as bicultural architecture appears to be more tenuous.  Despite this, the Futuna Trust, for example, issued a media release (26 August 2016) contextualising the building within Scott’s oeuvre, and stated that “All these buildings … are considered to be special as they … reflect the biculturalism of New Zealand’s history and population.”  The NZIA likewise describe Aniwaniwa as “”an innovative fusion of modern architecture and Māori building and design traditions.””  Ignoring the opposition between “modern architecture” and “Māori building and design traditions,” these assessments reinforce the language used in the 2012 New Zealand Historic Places Trust (now Heritage New Zealand) registration report which stated that: “The Visitor Centre is regarded by many as one of his most important public works, in which his intention to merge elements of Māori and European architecture is successfully explored,” and highlight the design’s ability “to unite Crown and Māori goals”; the assimilationist terminology of merging and uniting recalling Governor Hobson’s monoculturist proclamation “He iwi te tahi tātou” at the 1840s signing of Te Tiriti.

Stating that the building has a tenuous connection to biculturalism is not to deny (or confirm) whether (or not):

“Māori culture is pervasively expressed through the design, which references the traditional transition spaces encountered during a pōwhiri and formal entry on to a marae, and creates a wharenui-like space appropriate for proper reverence of culturally significant items of taonga.”

Nor is it to contest the magnificence of the design.  I do not have sufficient knowledge of the building, nor (more importantly) Ngāi Tuhoe tikanga.

Rather I am questioning whether the work of Scott, as an architect of Taranaki and Te Arawa descent, designing a commission for Te Urewera National Park Board, on Tuhoe land can be bicultural architecture.  If the tradition of biculturalism derives from a specific political context negotiating the position of Te Tiriti how relevant can this be to Ngāi Tuhoe – who never signed the Treaty?

Regardless, the question remains “Who should decide?”

Futuna Trust have asserted that:

“This building belongs to all the peoples of NZ, not only to the Tuhoe and Ngati Ruapani iwi of the Waikaremoana region, and to demolish it in spite of its undisputed national significance has the appearance of cultural vandalism.” (Futuna Trust media release 26 August 2016).

Ranginui Walker gave a different definition of biculturalism.  He wrote that: “biculturalism means more than Pakehas learning a few phrases of Maori language and how to behave on the marae.  It means they will have to share what they have monopolised for so long, power, privilege and occupational security.” (Walker, Ranginui The Meaning of Biculturalism (Auckland: R.J. Walker, 1986.) p. 5)

Architecture is always political.  As is heritage.  Key to the dynamics of politics is power, and key to power is the ability to decide.