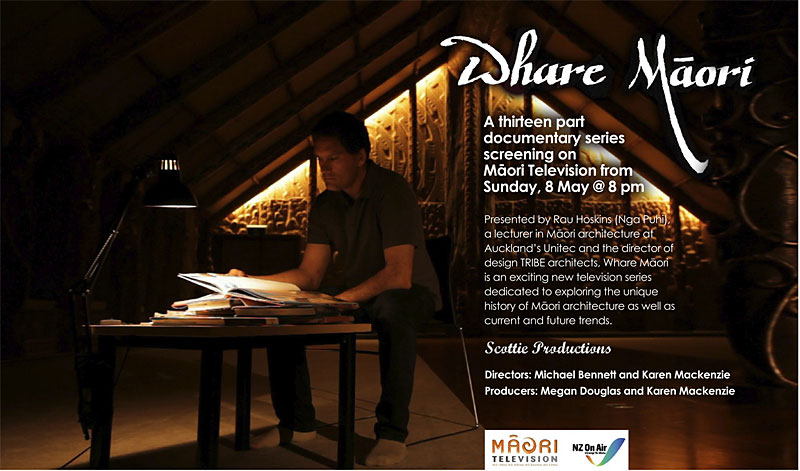 One of the latest offerings from Maori television is arguably the most significant contribution to the discussion of Maori architecture, certainly adding to the recent burst of scholarship in the area: Deidre Brown’s 2009 Maori Architecture, and Richard Sundt’s 2010 Whare Karakia. Whare Maori appears to be a comprehensive look at many aspects of Maori architecture.  The programme list certainly suggests this, with separate episodes on Ringatu architecture, two programmes on the Wharenui, and others on Whare Karakia, Ratana, Whare Wahine and John Scott.  In fact this series might be the first time NZ television has actually looked at the topic of women and architecture (Whare Wahine); a series breaking new grounds in many aspects of architecture.

The programme, having only screened its first two episodes, clearly has more to come, and I hope generates robust discussion about how architecture can be explored in the popular media (to be honest the formula of Kevin McCloud’s Grand Designs probably has a limited shelf life).  I saw the first episode of Whare Maori (am yet to catch up on number two).  It struck me as not simply looking at building – the traditional haunt of television architecture, but also presenting the possibility of more layered and complex social relationships, compared to previously television programmes.  The episode was possibly more focussed more broadly on people and how architecture and space operates beyond building because of its topic (The Village) – but we will see.  I’m hoping that the programme is adventurous in its testing of architectural ideas, politics and building in episodes to come.