If you thought that sometimes the writers at the Architectural Centre get grumpy about Architecture, then its time to show you that we aren’t nearly as harsh as some others around the world.
First up there is a site called Bad British Architecture, in which the critic certainly pulls no punches. Sample diatribe: “one of Europe’s biggest public spaces. I tell you this in case you were labouring under the impression that said image was created by a child in a remedial class with only three felt tips to choose from: puce, flesh and powder blue.” And that’s the polite bit. I’d love to tell you more, but I’m blushing at the language worthy of a seaman of the lowest order. Some of it is so grumpy it is even all in capitals. Shock! Horror! SHOUTING!! Someone needs to chill out a bit more… 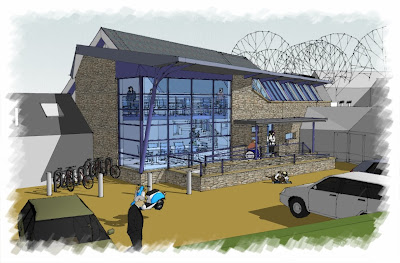 Next up one our list of fame / shame is Entschwindet & Vergeht, and a sample of the far more erudite commentary here is: “if you need an example of what an ‘honest solutionist’ designs, then here we have it; a temporary structure whose sole purpose is to hold a façade up until the new structure is built behind it. The specifically fleeting nature of this structure means that it must be built as cheaply as possible, without ‘elegance’ or any other aesthetic consideration, Thus, like the entrails of a building that are hidden under floors and behind walls, it is as close to ‘pure’ engineering as we can possibly get.” E&V has a love of music as well as architecture, so expect some good quality jazz commentary too (just why do architects like jazz?). The title, by the way, translates as something like Vanishes and Passes. Don’t ask me why.

Sit Down Man, You’re a Bloody Tragedy! is one of my personal favourites, dealing with brutalist architecture in a fairly even handed way. Describing some Glaswegian tenement architecture, the writer, Owen Hatherly, notes that: “The windows are absolutely tiny, as against the generous height of the tenement ceilings, and the chromatic complexities of the red and blond stone are near to the cheapest plattenbau concrete panels. The walkways attempt to add some futurist appeal to it all, but even they look poky. The overwhelming impression is grim, but to be frank, not uninterestingly so – the bracing Siberian air gives a Low-esque patina of tragic, imposing grimness. A ‘ladies’ hair and beauty salon’ called Intrigue certainly helps this impression along.” Nice. Cutting and yet well-read. You can even buy his book, Militant Modernism, if you are a fan of Modernist, Brutalist, and possibly Mentalist architecture. 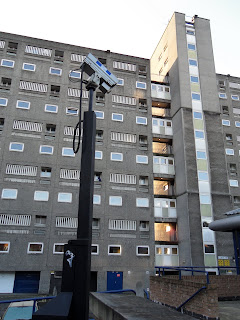 Confessions of a Conservation Officer is another blog on heritage architecture, taken from the point of view of a somewhat disgruntled heritage bod. Sample grumble: “I’ve moaned before about those, set by chance as custodians of our historic environment, who have no vision. But what happens when the vision is desperately wrong, and at odds with a century or more of best practice? Tit of the Week (and probably Tit of the Year) is Dame Simone Thurley, known (behind his back at English Heretics) as Gloriana. Anyone who doesn’t understand this opprobrium has presumably not watched the previously media-savvy Thurley wrecking his organisation’s reputation by inviting in the same TV crew who gave the National Trust a good kicking a couple of years ago.” Hmmm. Not surprisingly, this particular Conservation officer is anonymous.

Urban Floop is a blog that mixes a bit of architecture with a bit of moon watching, and gets stuck into crap developments with relish. “Interior design as a field here has become something that validates exploitative building trends like reduced ceiling heights, smaller rooms, bad construction quality etc. and works around these “challenges” to change finishes, break some walls, invent ‘innovative’ furniture (maybe cupboard during the day and your bed during the night kind of bullshit) and turn one generic space into another. Modernists have died, instead what remain are petty contractors bickering over percentages of material costs, whose interiors are expensive, impressive to look at but still very very generic, sterile and with no formal imagination, and this exhibition reflected all that. Or maybe it is just me…” Don’t hold back now.

There are more, many more, I’m sure. Tell us who your favourite is. And coming up next: inspiring bloggers, in case its all too cynical for you.